Linköping, Sweden – September 7, 2020 – The Dutch national communication security authority, NLNCSA, has cleared international medical imaging IT and cybersecurity company Sectra’s (STO: SECT B) mobile VPN for use up to and including the RESTRICTED security level. Sectra’s mobile VPN belongs to the fourth layer of the OSI model for computer communication. For example, the solution grants civil authorities, government officials and critical infrastructure operators remote access to internal networks without risking information leaks. The users can thus access the same information and applications as they would from their regular workplace, regardless of where they are working from. The solution is considered to be more secure than opening the entire network, which classic layer 3 VPNs do.

In conjunction with many organizations becoming more mobile, solutions are needed that allow even the professions that handle sensitive or classified information to perform their regular work outside the office as well. Sectra’s mobile VPN, which belongs to layer 4 of the OSI model, opens only the service or services the user has access rights to. This is in contrast to the classic layer 3 VPN, which normally opens the entire network for the mobile unit and thus entails a greater risk of access violations.

“Our customers need to be able to process sensitive information beyond the walls of their offices. This spring, it was very clear that society's critical organizations need tools and infrastructure to efficiently work remotely so that they can perform their everyday work tasks even in a crisis. They need a VPN that is even more secure compared to what is normally used today, and Sectra’s mobile VPN at layer 4 of the OSI model fills an important function here,” says Simo Pykälistö, President of Sectra Communications.

About Sectra’s mobile VPN
Users of Sectra’s mobile VPN include major companies, civil authorities, government officials and critical infrastructure operators. What they all have in common is that, whether in peacetime or in crisis, they need to process classified information and require products with a security clearance in order to communicate securely when working from home or on the move.

Sectra’s mobile VPN is based on patented technology and was developed for the mobile society of today and tomorrow. This means the organization has control over which services and applications the mobile user will have access to. In addition, this means that the unit can switch underlying networks without needing to reconnect. This makes the solution very well suited for modern urban environments, since the unit automatically switches between network cells and network types. The user and the device are additionally protected against access violations and information leaks, since they are always connected via a secure mobile connection.

Sectra’s mobile VPN can be used together with the crypto smartphone Sectra Tiger/R, which was previously classified for the RESTRICTED security level. This combination creates Sectra Mobile Workplace, a complete solution, and can be used on both tablets and smart phones. A device of this type can easily be connected to a monitor and keyboard to create a complete mobile workplace. Sectra also has a mobile VPN, which has not been evaluated, that is compatible with iOS.

About Sectra
Sectra assists hospitals throughout the world to enhance the efficiency of care, and authorities and defense forces in Europe to protect society’s most sensitive information. Thereby, Sectra contributes to a healthier and safer society. The company was founded in 1978, has its head office in Linköping, Sweden, with direct sales in 19 countries, and operates through partners worldwide. Sales in the 2019/2020 fiscal year totaled SEK 1,661 million. The Sectra share is quoted on the Nasdaq Stockholm exchange. For more information, visit sectra.com.

Within the business area of Secure Communications, Sectra develops products and services that protect some of society’s most sensitive information and communications. The offering includes secure voice and data communications, with solutions certified at the national level and by the EU and NATO, as well as security analysis and monitoring of critical IT systems, such as electricity and water supply. Sectra’s operations are conducted from its offices in Sweden, the Netherlands, Finland and the USA. 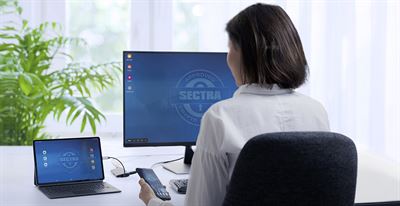