Last week, it was at last time for this year’s SCADA security event in Stockholm, which this year focused on increasingly connected and intelligent control systems. Leif Nixon, security expert at Sectra Communications, gave a highly interesting presentation on Building control systems—the forgotten attack vector, which addressed the challenges presented by the complex IT systems at hospitals. Below is a summary of his lecture.

Leif concluded his lecture with a very significant key takeaway: “The building control systems in healthcare are literally vital to life; if the oxygen supply disappears, for example, it could have dire consequences and could result in deaths. Unfortunately, the security in these systems is rather neglected. But it’s actually not that difficult to make things much better—not perfect but much better.”

To understand Leif’s concluding quote, we need to go back to the beginning and first of all understand hospital IT systems and how they are connected with what is known as the property control system. And the question that is perhaps on all of our minds—what is the threat scenario that hospitals must defend themselves against?

Ransomware is a type of virus that contains harmful code that encrypts files and computers. The purpose of a ransomware attack is to enable an attacker to demand a ransom to ensure that access to your systems is restored. Leif points out that ransomware is not only a crime these days, but can actually be a matter of national security.

“We have adversaries who wouldn’t hesitate to attack hospitals for political or financial gain. It is these types of individuals that we need to defend ourselves against. People who sink so low that they attack hospitals. This is today’s threat scenario.”

What is the structure of a hospital IT system?

The traditional perception is of a system divided into two parts.

The medical technology side with infusion pumps, MS scanners and similar equipment, which have built-in computers and may or may not undergo continuous security updates.

A hospital ideally wants to keep these systems separate, but on closer inspection, you can see the challenges involved and then reflect on the patient data systems. These systems are designed to process patient data, including journals, which straddled both sides of the system. This creates complexity in the system.  But that is not all. If we take a typical hospital clinic, how much is computer-controlled and nonetheless cannot be sorted into the administrative side or the medical side?

Who or what actually controls the electrical sockets, lighting, ventilation, water and other critical functions in a hospital? The answer is the third, and almost hidden, system: the building control system.

The image below contains several critical functions that are crucial for a hospital to be able to conduct the necessary care of patients. The common denominator for all of these functions is that they are run by a control system. 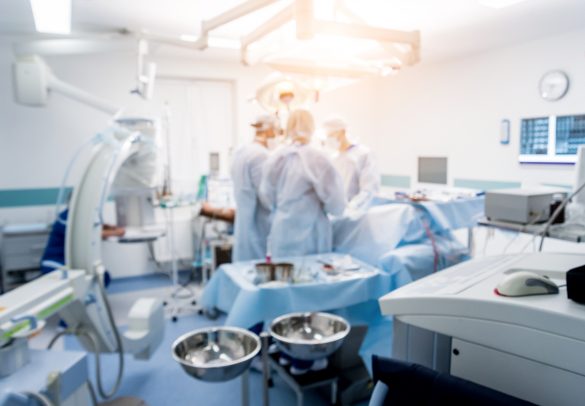 “Take electrical sockets, for example. A hospital must have electricity/auxiliary power 24/7 and this is run by a control system. Gas outlets and the distribution of oxygen, nitrogen gas and breathing air are required every day. Lighting. The switch on the wall is not just a switch. It is the remote control for the lighting. This means that it is also computer-controlled.”

“What happens if, for example, the ventilation in a hospital breaks down? It will become a little stuffy, but it also means that no surgical procedures can be performed and operating rooms must be closed if they have no ventilation. The same applies to water. Medical care cannot be provided without clean hot and cold water. ”

All of these functions are nothing less than vital to a hospital.

The network and all of its connections

If you look at how the architecture of a building control system is structured, you can see a flat network that is connected to everything. This is not good from a security perspective because there are several points of entry for malicious individuals to access the critical systems.

The networks in hospitals has been built up over many years and only 15 years ago, the system was completely separate. The number of computers involved was very limited, but in recent years, the systems have become much more digitized and more and more external connections have gradually been added to the operating network. Below are two examples of external connections:

To complicate the situation even further, it is difficult, if not impossible, to keep track of all of the random people who may be present at a hospital. It is not easy to have physical security around a network that is everywhere including “public” areas. Another challenge is that the building control systems in each building continue on with the building itself, which means that when a new building is added in a hospital area, it receives a new generation of property network.

There is a whole spectrum of various types of technology in a single hospital. In addition, the suppliers of building control systems are often relatively young in terms of security. It’s getting better, but it is not progressing very fast.

In different customer assignments in which Leif is involved, there are actually a number of rather basic measures that a hospital can take to increase the security of the property control systems.

Articles | Secure Communication
Why healthcare IT security is so hard